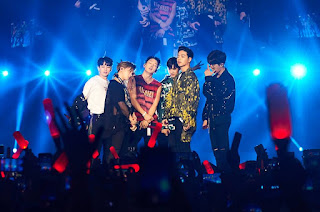 With iKON‘s sold-out, energy-filled show, it‘s safe to say that Manila has secured a spot in their next concert tour.
MANILA, Philippines — It has been four days since I attended a sold-out K-pop concert with tens of thousands of overexcited goers, and my body is plastered in pain relief patches from all the jumping, dancing, and waving my konbat (a light stick that fans purchase to flutter their support). As I write this story, iKON’s songs are on loop in the background, and the itch to see them perform live again keeps on getting stronger.
Korean pop music, or what’s commonly known as K-pop to non-listeners, may only seem to be colorful eargasmic tunes that turn to viral dance crazes or heavy electronic music performed by “idols.” But K-pop has become so much more. Aspiring K-pop idols spend years of their lives training — criticized and evaluated on their ability to dance, sing and act, only to be left with the uncertainty of ever even debuting, or being given that career. They are formed and exhausted to fit a certain mold and only the strongest get to have a taste of being called an idol.