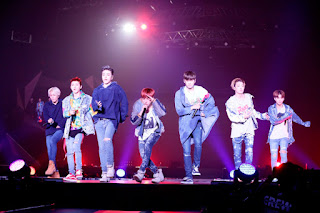 Obvious that Yunhyeong is an angel. During break,he didn’t went to backstage but instead stay with fans having little chat. There’s a group of Eun Jiwon fans nearby and they said (about Yunhyeong) he is such a nice person

~~Hit people with your kindness as always Song Yunhyeong pic.twitter.com/5cDoBwGjHE

Kim Hanbin: He is so effin handsome! I'm living for his forehead!! This is the highlight, Hanbin stares at me for like 5-7seconds straight. Bruh! I can't make eye contact coz it's effin intimidating!!! Huhuhu. Hanbin is so playful. But he is really thin :3

Kim Jiwon: Bobby's smile can kill you in a second. Bobby really needs an award for his fan service ;-( And his english! Omgg~ bobbyy! Bobby always arranging his pants I don't know why~ he kept standing and arranging it. Bobics are freaking~

Goo Junhoe: It was my first time seeing June for a long time. His habbit is he is making weird gestures on his face when he is thinking something. But bru, junhoe's smile can make you fall! HE IS TEASE!!

Jung Chanwoo: Our baby...hmm I can't tell more. Still, he is still a baby. He is so soft but he can take your heart off when he smile :3 gosh! Chanwoo's skin is literal a baby. He doesn't need a thick make up coz his face has it's natural pigments. Chanwoo-yah ;((

But wait, I hope there's someone has a picture of what happened lately. Don't expect some pictures to me coz I didn't captured any. :3 Hope you enjoyed this thread~ love you!

OP asked Chanwoo about when he’ll film the Gauntlet.
cw: “who gave me the gauntlet?”cw said the gauntlet doesn’t work so he can’t film himself playing it.OP asked “why doesn’t it work?”either Bobby/YH said “We tried filming it but it didn’t work”but it’ll appear in his channel! https://t.co/S0sc02D9Zv

Yunhyeong was alone at the scene chatting w iKONICs, doing vlog on his own as an interest, will be released in April~
Fans asked if yoyo is okay w not going to the toilet, he said its alright since iKONICs are here~😭❤️
OP: "Yunhyeong oppa, now is ur fanmeeting"😆 he replied: Yes pic.twitter.com/TQWW5HRmiz

when they announced the result, 4 teams started to hug each other. Hanbin was so soft looking at them and he turned around to hug Bobby. So cuteeeee

We sang happy birthday to Junhoe ㅠ
Junhoe: THANK YOU!!!!

Donghyuk: I have something exciting to tell you.
Fans: Whatttttt
Yunhyeong: What's that do we know?
Donghyuk: Yes it's something we all know. But I'm not gonna tell you. Let's wait 👀👀👀

Us: Yunhyeong you're cuteeee!
Yunhyeong: *shouting* AREN'T YOU GUYS JUST SAID THAT TEAM IS CUTE!!!!

Us: *screaming beacuse one team is freaking cute*
Donghyuk: This is the first time people ignored us and focus only on the stage. I'm angry (나 삐졌어!) 😤

Us: *screaming beacuse another team is freaking handsome*
Some fan: Donghyuk-ah are you angry?
Donghyuk: Me? Yes I am 😤

While the others went inside to rest, Yunhyeong is staying with us and talking to us huhuhuhu ㅠㅠ

YH: The fans who came to Stage K worked really hard, I could at least sit down, but they were standing the whole time

Fans also asked Hanbin to do a ch+ V live before he goes filming "LOTJ", and he gave a baffling(?) smile.
▪Fans pretended to be calling Bobby with the remote controls given (*acted like those were phones, I guess), and he went along with them. Fans told Hanbin to come back from

▪There's a height difference between the standing area and where the members were, and the fans wanted to see Yunhyeong's face hence they weren't seated even during the break. Seeing that, Yunhyeong stood up and told them that he'll be standing, so they can sit down and rest T_T

During stage k pre recording before, fans were telling hanbin
“Have a safe trip to the jungle don’t get sick don’t get hurt take care”

Hanbin didn’t say a word but keeps nodding his head

Fans keep pretending to call Bobby with remote control(?) and he keep taking the callㅋㅋㅋ They also told Hanbin not to get hurt in the jungle and come back safely, Hanbin noddedㅜㅜ Yunhyeong's vlog will probably be done sometime in April. pic.twitter.com/90mB31XlAG

OP said BOBBY was so friendly towards the foreign friends there, he laughed and joked together with them during the recording#iKON #BOBBY #아이콘 #바비 pic.twitter.com/4nvOGlJFWM

During the voting, fans suddenly aiming their remote control towards BOBBY's direction so he asked them, "All of sudden a gunshot? All of sudden?" #iKON #BOBBY #아이콘 #바비 pic.twitter.com/RSsy29uZw3

OP said BOBBY's outfit today is so pretty. OP also said that BOBBY made a unicorn gesture by putting his fingers above his head to make a unicorn horn#iKON #BOBBY #아이콘 #바비 pic.twitter.com/19OmRl72g1

The waiting for recording was so long today and fans need to stand up so BOBBY keeps asking the fans, "Are you alright? Aren't you tired? Have a strength.." #iKON #BOBBY #아이콘 #바비 pic.twitter.com/LtIqgwSTvc

Because fans keep telling BOBBY that he's cute, he told them, "shhhh (to keep quite)" and OP said it was so cute (the way he said it)
BOBBY made a finger heart sign during the recording & when the fans said hwaiting to him he also followed their gesture#iKON #BOBBY #아이콘 #바비 pic.twitter.com/R1Pd9PmV94

why is he so cute for ㅠㅠㅠ 💖

A black american girl cried. She said she performed well because she want to make Bobby proud. Bobby!! Omgg!!