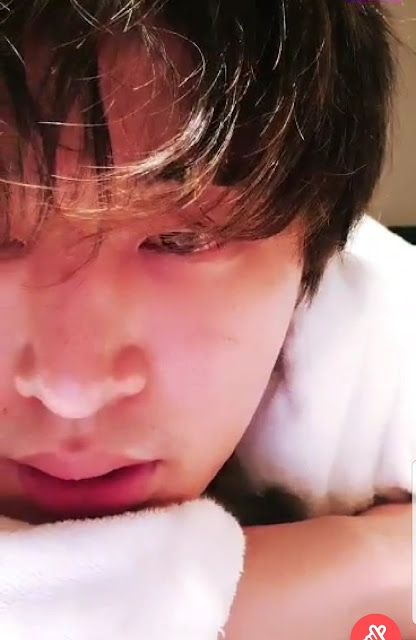 Hanbin: I like ballads, i dont care about genre, if its good music it's good music.

Hanbin: Ah there’s a new trending dance. It’s called the woah dance. This time I really did it first. No one really has done it in Korea. It doesn’t come out on insta but I feel like it will. Please recognize me as the first.

Hanbin: I’m not not uploading on SNS on purpose it’s just that I have no pictures to upload

Hanbin: For performances, I usually get an idea in my head and then share that vision with Donghyuk and I leave him in charge of the choreography

Hanbin: Oh, the flushing noise is so loud? I was worried about whether or not it would be too loud and it’s really loud

Hanbin: I read poetry. One hyung buys a lot of books and he lent me to them.  I borrow books and clothes from One hyung.

Hanbin: My concept is being not too drunk. I’m just a little tipsy. If I were really drunk I wouldn’t be able to do this. My face isn’t that red when I saw it in the mirror. I like concepts so this is my concept. Being a little drunk.

Fan: What were you in charge with in the jungle?
Hanbin: I left no food behind. I ate everything. That’s why I gained some weight

Hanbin: I’ll leave on an unsatisfying note. Chanwoo’s next, we’ll keep up the relay. He’ll do it soon.

Hanbin: I won’t be able to promise a v live often but I’ll promise to do it.

Hanbin: Okay, that’s it for today! There’s a lot of exam testers so please take it well. Have a good night—in everything, life, work, and love, be well. See you at the fanmeeting. Hope we had a good conversation.

Comment: Your outfit today was nice.
Hanbin: This? I’m wearing the hotel gown.

someone’s spoiling the Avengers storyline.
Hanbin: what’s with this person? don’t give out spoilers! i saw your username....i know ur name so don’t give more spoilers

Hanbin’s talking about the drink he’s having now lol
hanbin said there’s no may comeback.........

someone asked Hanbin a question
Hanbin: OH? this was the person who spoiled about the Avengers so i’m not gonna answer you.
😂😂😂😂

Hanbin: (talking about the dresscode) it doesn’t have to be an accessory! it can be anything like hair tie, bracelet. Don’t tell me you don’t have anyth that’s pink or purple at home that u can just bring along?
😂😂

Comment: How long more does Europe fans have to wait? We want to see iKON.
Hanbin: We are also thinking the same thing. We don’t know when we can go and see you. We’re ready but we’re not sure when but we will go there soon.

Hanbin: We’re not gonna make a comeback in May. I’m not the one who makes the decision too and we’re not ready yet so a May comeback is abit impossible.

Hanbin: Someone keeps saying there’s someone behind me. As you guys know, i’m not that scared of ghosts, so....

Hanbin: “There’s always changes in plans, we have new plan now and it’s going smoothly, so do not worry”

“Is unit still happening?”
Hanbin: “Yes, but we can’t tell when and how yet, it’s still unknown”