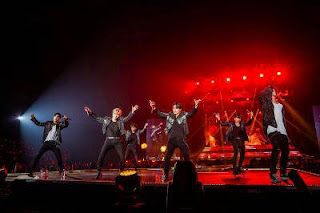 iKON performed on the first day on "iKON JAPAN TOUR 2019" at Fukuoka Marine Messe on July 27 (Saturday). Fans also came to the venue for the first time in about eight months, and they showed that they could not hide their excitement. They start with hype song "Sinosijak Remix". For the encore they were including "Bling Bling" and "Love Scenario" with 11.000 fans came to the venue, reached a high tide.

"I want to meet iKONIC, I was able to see the stage in the unit was fun!" And said that it was a pleasure to spend a long time live with IKONIC.

In the second half of the live, They made the venue dance with upper songs such as "DUMB & DUMBER" and "B-DAY", and "Thank you for coming to see us unchanged! Finally, the main part was finished singing with "WAIT FOR ME" with the venue. On this day, in response to the unstoppable encore, it showed off until the double encore, and the first day of the tour which felt a sense of unity from the beginning downed the central act of enthusiasm.
Admin
Add Comment
Article , Japan Tour 2019
Sunday, 28 July 2019