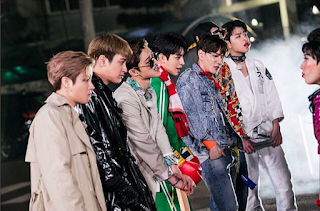 iKON TV Will Be Aired on April 21st 2018 - iKON showed hilarious teaser for iKON TV teaser. They were really swag on the ganster suit. B.I looks so funny while bringing stick with black glasses. Meanwhile, Jinhwan seems so sexy with the old black glasses. June, and Yunhyoeng also really impressing with their sport suit. Donghyuk and Bobby looks so trendy and funny while bobby draws his mustache with pen. And the hilarious one also Chanwoo who brought Konbat to fight.

They were faced with 5 women who wore old suits. The teaser are so hilarious and fit iKON`s swag so much. iKON TV will air 21/04/2018 on iKON channel of youtube, JTBC and Vlive on every saturday at 10PM KST.