iKON, A Heat Sing Along Concert in Singapore..."A country We Want To Come Again" 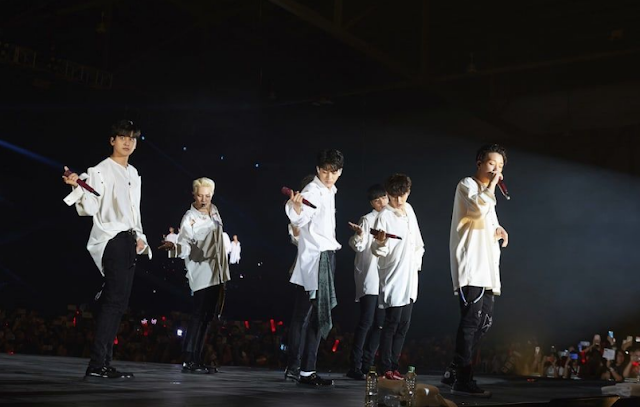 Boy Group iKON showed their passion to their fans at their Singapore concert.

iKON communicated with audience through 'iKON 2018 Continue Tour in Singapore' at the Singapore Expo Max Pavilion on the 4th. They held their overseas tours in Sydney, Melbourne and Singapore the last week.

Event though it was a rainy day, the fans who attended the concert welcomend iKON as they sang together with the group the starting song 'BLING BLING' and 'Sinosijak'. iKON was full of energy even up till the song 'Rhythm Ta'. And introduced tehmselves to the crowd after that.

Jinhwan said, "Event though I didn't have enough time to travel Singapore, I really like how Singapore has fresh air." Donghyuk expressed with aegyo, "Singapore is a place I would like to come again to travel. It is really beautiful country.

iKON held a solo tour in Singapore 2 years back in Juli 2016. Because they haven't had a concert in a long while, Bobby & B.I split the audience into half and to sing 'Love Scenario' and become one with audience.

Bobby and B.I fired up the stage solo stages for 'Tendae' and 'One and Only' respectivel, before performing 'Anthem' together. The rest of the iKON performed 'B-Day' together, and all the audience rose from the seats. making it like a live festival.

The sing along during the stage for 'Love Scenario' was the most shocking. The Singaporean fans sang 'Love Scenario' along with iKON from the start till the end without missing any word.

The song taht charted No. 1 for 43 days was a craze among kindergarten and elementary school student gave iKON the nickname 'Elementary School's President'. The song as received much love overseas due to its addictive melody the warm feelings it gives to the listeners.

Before the concert ended, iKON thanked the Singaporean fans once again. Jinhwan said, "We were happy to come to Singapore. It would be nice if we can come back again." June put down his mic and shouted 'I Love Singapore.'

The audience presented iKON with a special event which touched iKON. Immediately after the main concert performance, the Singapore audience raised up the slogan 'We will protect iKON.' and iKON responded with the fan song 'Just For You.'

iKON will be continuing their overseas tour to meet their fans, holding concert in Budokan Japan on 6th November, Manila Piliphines on 11th Nov, Jakarta on 18th Nov, and Hong KOng on 25th Nov. They have specially scheduled to release a repackage album on the lasy day of this year, 31 December.

Translated a Naver article iKON CONTINUE TOUR in Singapore for all the fams out there who were singing in Korean from start till end for all the songs 👊🏼 https://t.co/sdIL544Zku#iKONinSG #iKONTINUEinSG #CONTINUETOURinSG #MAMAVOTE #iKON pic.twitter.com/GhAYkuxnNa
— 진혜은 (@vospoires) November 5, 2018