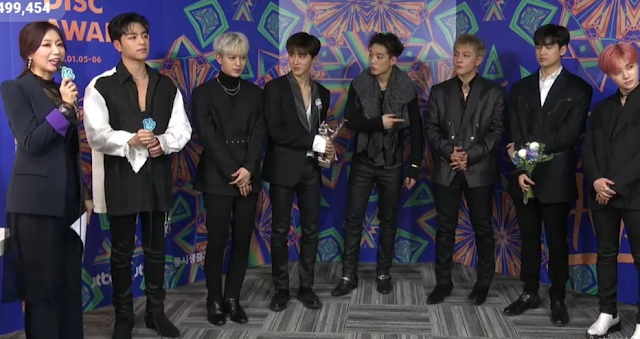 [GDA BACKSTAGE]
MC asked if they wanted to go for a vacation some time this year and Hanbin said they went to Jeju for a vacation in 2018, this year, whenever they have the chance, they would like to go for one (vacation). #iKONonGDA #iKON

[GDA BACKSTAGE]
MC asked about future plans after winning the daesang:
Hanbin: the start of last year's promotion in winter was so good. We had a good start, and we got good results from it and now we're starting again, we're hoping for good results.#iKON #iKONonGDA

Same Q was asked when interviewed for Digital Bonsang:
Future plans:
Hanbin:in 2019 too, oh it's new year,Happy New Year everyone. In 2019,iKON is preparing a new album too and we'd like to show more energetic image. We ran on last year's path,now we're starting up on a new path

MC: people are wondering, when does iKON rest?

A. we rest in between busy schedules! we also rest on chinese new year

junhoe: also we are youth!! even if we rest a day or two in between, we recover!!!

is their spoiler for the concert tomorrow?

yunhyeong: i think the concer tomorrow will be soso tiring! that means we have a lot of stuff for iKONICS ready.

“always, iKON could get tired. but thanks for also not making us tired and giving us energy and it’s nice to see you liek that. also! it’s our concert tomorrow! you have to dance hard! it’s our fans! it’s an encore so we have to work harder! let’s stay young +

bobby: yes hyung. i got it

“he always stays by our side, starting from songs and dances, and takes care of everything so thank you very much, b.i-ssi? but im worried bc i hope he rests more. he doesnt sleep enough. the members are always worried. b.i is the best leader ever to us. ty!”

“even if our team is depressed or really happy, yunhyeong is always optomistic no matter the atmosphere. so thanks for staying with iKON has yourself with energy and power”pic.twitter.com/3Tu4ADDAaC

“2018.. u had a lot of difficult time, there was good things and bad things, but i always love your free personaity, and i like you bc u are rough. let’s run roughly this year too”pic.twitter.com/uauh7G8peU

MC: There’s a comment said “if iKON is not here then iKONIC will not be here too” but I believe it’s the same for iKON right. There’s no iKON without iKONIC pic.twitter.com/q78aBTgfUv

iKON backstage interview for GDA Daesang
Junhoe: iKONIC, and the staffs who help us a lot also at home, the family of each one of us who keep supporting us non stop. Without all them, this is impossible for us. Because of their existence we can existpic.twitter.com/q78aBTgfUv

Bobby asked for a round of applause to Hanbin because all this is not going to happen without Hanbin
Then Hanbin: I am Hanbin.

LOL! Congratulations for the daesang once again iKONpic.twitter.com/unP0A6EQ69

donghyuk to chanwoo:
chanwoo’s always thinking of his hyungs despite being a maknae & we’re always very thankful for that. thank you for always thinking of working hard & in 2019, i have nothing to ask for but let’s continue to work hard together and let’s have fun as we are now pic.twitter.com/aHi6QorBPf

Chanwoo to Jinani:
When we let ourselves, you keep us, when we need to rest, you let us rest
Always a hyung that I’m thankful
But, you’re trying to take responsibility all the time
Don’t feel burdened
We have other hyungs too
I hope you live a bit more freely ++ pic.twitter.com/kmp0Y04iIT