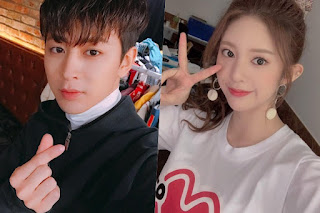 They have stated that the two idols are not dating

Well... this is awkward... pic.twitter.com/Cle4v2rKlz

Song Yunhyeong first to get caught in dating relationship in iKON, the reason why fans didn’t get mental breakdown from the news? https://t.co/ORU7ewuEyq

This is because the fans have been convinced with Song Yunhyeong's sincerity for them all these time. pic.twitter.com/swDVnsvotU