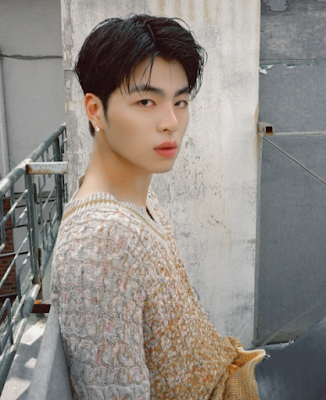 Our initial versions of different people are defined by simple interactions and first impressions. In a multi-faceted industry that #iKON belong in, it's not often that people get pass this concept.

At the time they debuted, he was just 18 years of age. No one stopped and bothered to ask what he was feeling at the time. Why was he making those faces? Why does he seem so rude?

Even some #iKONICs forget that before Chanwoo came in, #June was the REAL maknae of the group. He was never the aegyo type of dongsaeng. He's more like the sassy dongsaeng who annoys you a lot. He's rarely endearing. More than affection, his savage teasing is topnotch.

His exuberant personality, cheeky laugh & bizarre way of thinking makes him a natural comedian. He's straightforward w/ his unfiltered thoughts. He gets in trouble with his hyungs, more times than I can count, bec of his antics. #June is our very own manufacturer of #iKON memes.

June is the guy who seem to not care about the things going on around #iKON. He's also the same guy whose frankness is misconstrued. He asks questions no one dares to ask.

He didn't know that the sun doesn't turn into the moon at night. He didn't know that you can't wash your phone w/ soap & water. He doesn't know a lot of things. But one thing he knows for certain ever since the beginning is that he belongs to the stage.

I want people to understand that once you get pass #Junhoe's exterior persona, you'll find someone who isn't completely sure of themselves. No one ever truly is but people forget that because it is easier to find faults in others than within ourselves.

Trust that none of the members would leave any of them behind. Trust in that each member would hold their end of the bargain. Trust that onstage, it will be them, the SEVEN of them as #iKON.

A lot of people tend to criticize his over-the-top adlibs and boldness during lives and how his spear-like self-confidence seems so out of control. #June doesn't do anything he's passionate about half-assed. There is no gray area. He loves what he loves and hates what he hates.

Junhoe's personality is much like water. No matter how many times I try to wrap my hands around him, he slips through my fingers. But one thing have always been clear to me. Each time he tries to escape my grasps, his imprints remain.

June is a man of many things. June is sassy. June is childish with his infectious cheeky smile and charming naivety. June is gullible. June and his two braincells are enough to make us laugh https://t.co/E01sHNynIa

Sometimes its okay not to be 'fighting' all the time and you can be worn out. You can be tired, but be happy." - #Junhoe https://t.co/iOQ6vMNz4v

And there you have it. It's been a long time since the last time I've posted a thread. I hope you guys enjoy reading. Please credit where credit is due. Thank you.